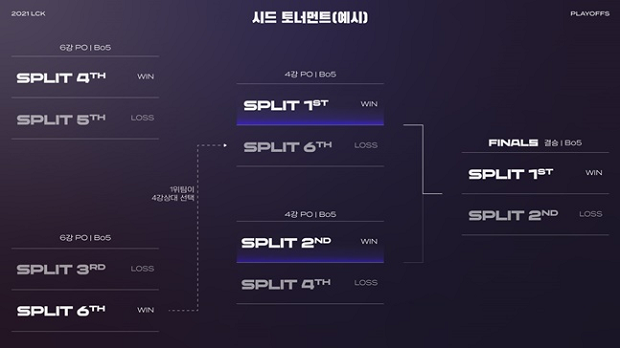 The 2021 LCK regular league No. 1 goes through PO. The lowest annual salary is 60 million won.

The League of Legend Champions Korea (LCK) has unveiled major changes that will be applied from the 2021 LCK Spring, which will open on the 13th.

The biggest change is the change in LCK playoff method. Previously, the top-ranked team in the regular league went straight to the finals, and the fifth-place to second-place teams decided the rest of the finalists through the Challenger Tournament method.

For teams, even if they miss the top spot in the regular league, they can seek to advance to the finals and accumulate multi-competition experience, which is expected to boost their competitiveness in international competitions. All games before the playoffs will be played in the best-of-five series.

LCK also considered a significantly expanded double-elimination scheme, such as the LEC and LCS, but it was difficult unless the regular league was reduced to a single-game system, given the annual schedule that was organically linked to the international tournament schedule. After collecting opinions from 10 teams, it was confirmed that the majority of the teams wanted to maintain the current regular league system of the best-of-three games but to slightly expand the playoffs.

Starting this season, LCK Challengers League (LCK CL), the official second-tier league, will also be held. LCK CL’s regular league will be held in the second round full league, and five games will be played on a single-game basis every Monday and Tuesday without LCK games. The playoffs will be played in the same semi-final seed tournament as the LCK, with a total prize of 80 million won.

LCK and LCK CL can exchange rosters. Call-ups and sand-downs are expected to be possible during a total of three rosters registration periods, which will be held in time for the opening of the split, the second round and the start of the playoffs, which will widen the scope of each team’s strategic operation.

In addition, the “LCK Academy Series,” a grassroots competition where trainees or aspiring professional amateurs from each team who are not registered for the roster, can participate, will be operated regularly.

LCK Secretary General Lee Jung-hoon said, “There was a consensus among the league, teams and fans that the playoff method needed to be changed to boost the competitive edge of the international stage. After hearing opinions from 10 teams about the change, most teams hoped to maintain the regular league and expand the playoffs.”

“We will make efforts with the teams to build a foundation as a sustainable ecosystem and develop into a qualitatively competitive league,” he/she said.

Meanwhile, in 2021, global companies that have noticed the value of LCK will join as new sponsors. Global partners such as Secret Lab and HP Omen will join LCK, and Woori Bank, McDonald’s, and Logitech will also serve as official sponsors.

The 2021 LCK Spring will be the first game between Gen.G. eSports and KT Rollster on January 13.