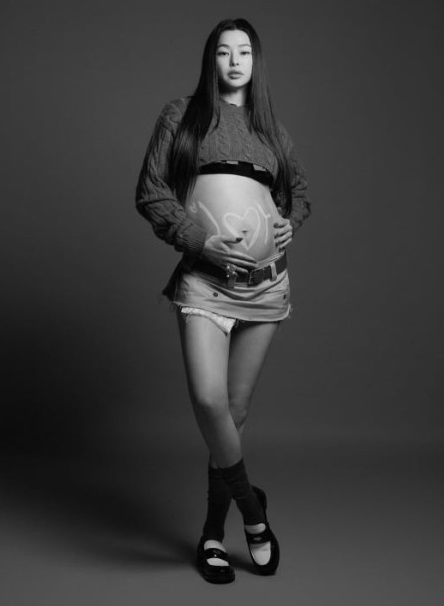 Actress Lee Ha-nui, who will become a mother, released a full-life pictorial in June. Lee Ha-nui’s “beautiful exposure,” which boldly revealed her belly and expressed her love for her daughter to be born, drew admiration.

Lee Ha-nui posted on her Instagram on the 24th, “With Joy for 36 weeks. June, when she will be born soon,” she released a full-term pictorial. Most of the existing late-life pictorials wear dresses and have an elegant and elegant atmosphere. However, Lee Ha-nui’s late-life pictorial was simply hip. It proudly revealed the D-line with a bra top, crop T-shirt, and low-rise skirt and pants that wear down to the pelvis. It also contains affection for the daughter who will be born by using the baby’s birth name “JOY” on her belly. In the dress outfit photo, Lee Ha-nui also made a unique pictorial by tying her hair in pigtails or choosing a dress with a lot of exposure due to incisions. Even during pregnancy, thorough self-care also impressed the “healthy body with only a belly.”

In Lee Ha-nui’s unique and beautiful pictorial, fellow celebrities cheered by leaving comments. Jin Se-yeon said, “Hani Joy,” Lee Yoon-mi said, “Awesome,” Lee Won-geun said, “It’s touching,” and fashion designer Yoni P said, “Oh my gosh, there’s no pretty, sexy, and cute Mami! My belly is so pretty and it’s bulging! I was so happy during my pregnancy, but you look so happy, too.”

Lee Ha-nui admitted to dating a non-celebrity businessman in November last year, and later married on December 21. Instead of holding a fancy ceremony, they held a wedding pledge ceremony attended by only their families. She also won the best acting award for her Friday-Saturday drama “Won the Woman” at the SBS Drama Awards held late last year. Lee Ha-nui also expressed her affection for her husband, saying, “There was a good thing (marriage) not too long ago, and I want to share my joy by thanking my half who has been with me all my life.”

At this time, Lee Ha-nui did not reveal her pregnancy, but a new life was already growing in her stomach. In January, Lee Ha-nui’s agency said, “I’m sorry I couldn’t tell you in advance for the stability of the mother and the fetus,” adding that Lee Ha-nui is scheduled to give birth in June.

Lee Ha-nui drew attention for her colorful “specs” such as “a graduate of Seoul National University” and “a graduate of Miss Korea” at the beginning of her debut. However, Lee Ha-nui rather washed away these colorful modifiers and walked out on a “serious move” to create a new modifier. She proved her wide acting spectrum by challenging various characters. It also showed that being elegant and modest is not the beauty of women, but being confident, healthy and energetic is also the beauty of women.

In “Won the Woman,” a combination of action drama, comedy, and romance, she performed romance, comedy, and action, giving viewers catharsis with her delicious acting. In “Extreme Job,” she broke the stereotype of female detective characters by not wearing makeup. With the film, Lee Ha-nui also became a ‘million-actor’. In the rated R comedy “SNL,” “Hey, how are you, everyone?” Do you know who I am? He even created a buzzword called ‘Lee Ha-nui’ and showed a ruined and ridiculous acting.

Lee Ha-nui, who has progressed from acknowledging dating to marriage and pregnancy, has progressed at a high speed. At the peak of her career as an actress, she is now facing a new turning point in her life as a mother. As an actor who also showed a smart appearance as an actor, Lee Ha-nui as a “tiger mother” is also expected.