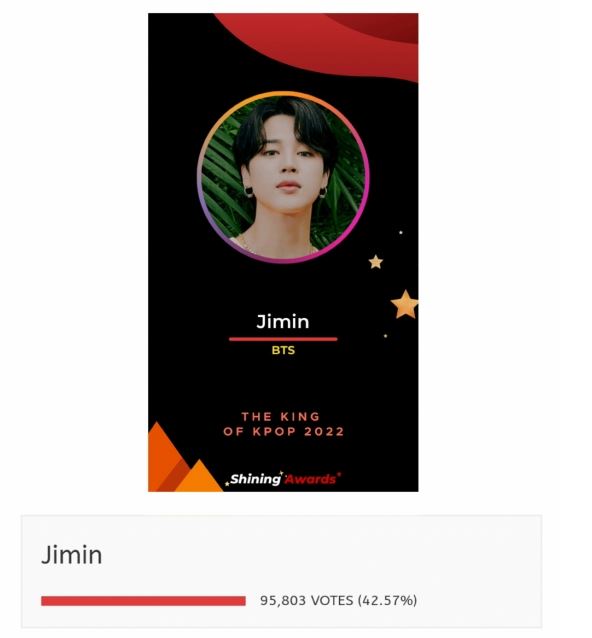 BTS (BTS) Jimin became the king of K-pop and made this year his year.

As a result, Jimin topped the Shining Awards’ “The King of Kpop 2022” after “Kpop Idol of the Year” and “KING OF KPOP” conducted by DABEME for the fourth consecutive year, showing the dignity of the K-pop No. 1 player who shone in 2022.

Jimin, who debuted as BTS in 2013, was the main dancer at Busan Arts High School and captivated the public with his splendid and technical performance at the time of his debut, and received more attention as a lead vocalist after the “Hwayang Yeonhwa” series.

In addition, he has always shown deep fan love through his mysterious visual and exemplary relationship between artists and fans of two-way communication, and is considered a life role model, not just as an artist, due to his good influence on donations and the socially disadvantaged.

Regarding Jimin, an American journalist said, “More bright and warm than anything, it is more like a once-in-a-lifetime “supernova,” and Korea’s leading monthly cultural magazine CULTULA described him as a “character like a hero in a myth.”

Jimin, one of the two Asians and the only member of the team to be included in the “30 Best Boy Band Members” selected by the British daily Guardian, has been called a leading member of the K-pop boy band BTS, which has continued its global reputation, giving the modifier “BTS FRONTMAN” in the Australian music magazine CULTR.

With Jimin’s symbolic and unrivaled presence around the world, Jimin, who is listed as “King of Kpop” on the British-American dictionary site “Urban Dictionary,” succeeded in establishing himself as an artist representing K-pop beyond the team.