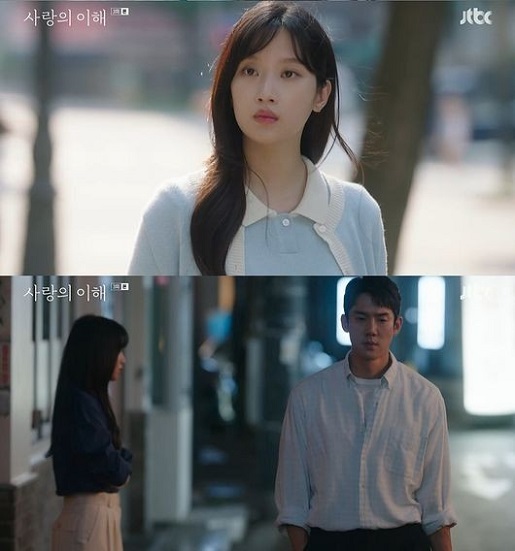 In the third episode of JTBC’s Wednesday-Thursday drama “Understanding Love,” which aired on the 28th, Ha Sang-soo (Yoo Yeon-seok) and Ahn Soo-young (Moon Ga-young) were infiltrated and their relationship froze again, making viewers unable to take their eyes off.

Ha Sang-soo, who thought Ahn Soo-young and Jung Jong-hyun would be lovers after seeing the two hugs, treated her in a different manner than before, but considered her behavior childish. Ahn Soo-young also cared about Ha Sang-soo’s sudden change in attitude, but even showing it was hurtful, so she passed it as if it was nothing.

In this situation, a new atmosphere began to blow into the minds of Ha Sang-soo and Ahn Soo-young. This is because Ahn Soo-young felt pity like a younger brother to Jung Jong-hyun, who was clumsy but approaching carefully. Unlike Ahn Soo-young, who likes Ha Sang-soo, when he was with Park Mi-kyung (Geum Sae-rok), he naturally showed his true feelings. In the meantime, Park Mi-kyung’s feelings were fluttering.

Park Mi-kyung, who successfully completed the project, took this opportunity to propose a weekend date to Ha Sang-soo, and Ha Sang-soo gladly accepted it and called it her ice hockey field. Ha Sang-soo’s relentless charm, which he saw for the first time, was enough to make Park Mi-kyung’s heart pound, and a strange gaze came and went between the two.

Ahn Soo-young’s emotions, which had been accumulating one by one, eventually burst out due to the kindness in his body like Ha Sang-soo’s habit. Ha Sang-soo also expressed his disappointment to Ahn Soo-young, who kept asking about the day. But soon, her expression hardened when she said, “You didn’t come that day, you didn’t come.” I wonder what Ahn Soo-young saw and the next story of those who have deepened their emotional goals.

The story of the day when the relationship between Yoo Yeon-seok and Moon Ga-young went awry can be found in the fourth episode of JTBC’s Wednesday-Thursday drama “Understanding Love,” which airs at 10:30 p.m. on the 29th.

Meanwhile, JTBC’s Wednesday-Thursday drama “Understanding Love” will be rerun at 8:50 p.m. on the 29th, followed by episode 4 from 10:30 p.m